The climate changes that are affecting the entire planet have forced the transition to a low-carbon economy, which is being implemented through international agreements, regulatory measures to reduce greenhouse gas emissions, in addition to the use of technological innovation.

A2A took account of these changes in the context of its Strategic Plan 2021-2030 in order to make its financial and strategic planning resilient. In particular, to do this, a thorough analysis of the risks and business opportunities has been implemented, which integrates from the beginning the aspects related to climate change.

According to the Recommendations of the Task Force on Climate-related Financial Disclosure (TCFD), to which the Group has committed itself to align, A2A can be exposed to 2 types of risks:

According to the logic of the TCFD, the following opportunities were also identified:

The risks and opportunities analysis has been set according to a temporal dimension, considering the climatic, economic, energy and regulatory reference context (scenario). In this regard, three time horizons have been defined:

To make it easier to read, a prospectus has been created (see. the table as an example) where the climate risks and opportunities are described - in detail - identified in accordance with the recommendations of the TCFD, the methodology and the ERM process of the Group. The following elements have been inserted for each category:

Climate risks and opportunities for the A2A Group

4 For economic and financial risks and opportunities, the impact scales refer to impacts on EBITDA (downside for risks and upside per le opportunità):

The ERM function then carried out a further in-depth analysis aimed at quantifying the impacts of climate risks and opportunities on the Group’s economic and financial results. These effects are measured in terms of the change in the Group's overall EBITDA forecast in the Strategic Plan:

In summary, below is the representation - on the impact/probability heatmap - of the risks and opportunities described in the detailed tables. 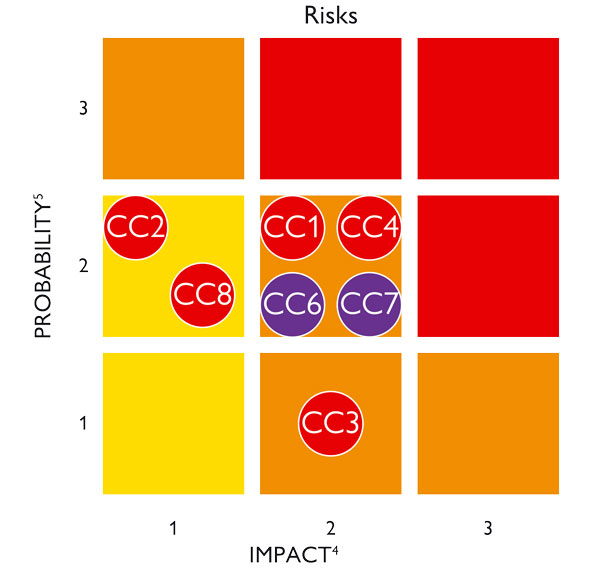 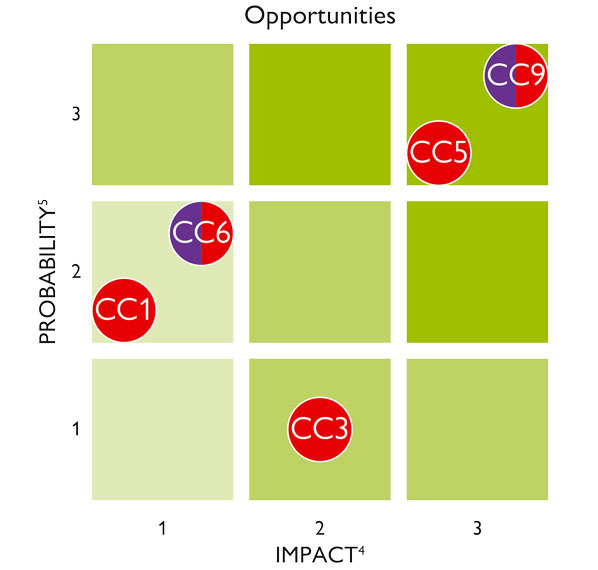 For economic and financial risks and opportunities, the impact scales refer to impacts on EBITDA
-downside for risks and upside for opportunities.
(low impact: less than 5 M€/a; medium impact: between 5 M€/a and 10 M€/a; high impact: more than 10 M€/a).
*CC5 opportunity margins already included in the Strategic Plan

Our concept of sustainability

Back to the framework