The stakeholder listening process, implemented with more or less structured initiatives and chan-nels, stems in fact with the objective to generate shared and lasting value and results in a conciliation of the Group's interests with those of its interloc-utors.
The stakeholder engagement initiatives imple-mented by the Group are tracked by means of a database that maps - every six months - the rel-evant stakeholders, the engagement activities car-ried out, the issues addressed and the needs that emerged.
Every year, the Group’s stakeholders' detailed mapping is reviewed and updated, reconverting it to 5 macro-categories:

During 2020, more than 600 initiatives involving stakeholders were carried out. These initiatives were clearly affected, in terms of number and type of activities, by the effects of the Covid-19 emergency. The main ways of listening and involvement, in fact, were meetings, conferences and events held online.
The stakeholder groups most involved were national and local institutions, employees (especially with regard to pandemic management needs), schools and universities 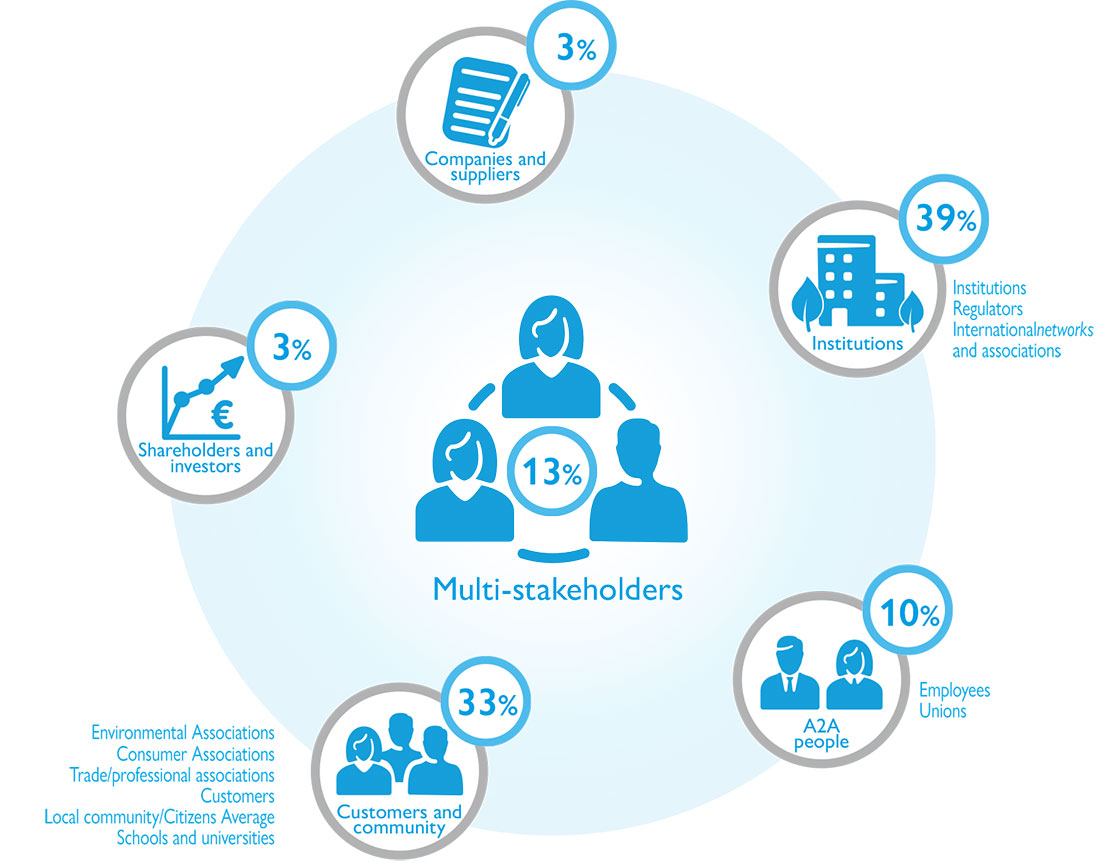 Our Group uses different ways and tools to engage its stakeholders, defining in every occasion the tools best suited to the relationship and type of engagement that we want to achieve: one to one meetings, working groups or committees, surveys, conferences, press conferences or events, etc. Among those more structured we have formuAscolto, multi-stakeholder work tables, which have as their goal the development of projects aimed at improving the quality of life of the communities in which we operate. Through focus groups, the Group’s commercial companies identify how to evolve services and thus respond more and more precisely to the needs of our customers. Or, through virtual meetings and discussion groups on specific platforms, we learn about the thinking of our stakeholders about ourselves and our projects.

Since 2015, A2A has had a structured programme of listening and dialogue with the stakeholders of the territories in which it operates (forumAs-colto), by means of workshops and events, with the aim of grasping the specific features of the indi-vidual communities, building a discussion on issues that are important for A2A and its stakeholders and contributing to the development of ideas and projects in line with the Group's objectives.

In the first edition of the programme, 6 forumAs-colto were held (Brescia, Milan, Bergamo, Valtelli-na-Valchiavenna, Friuli Venezia Giulia, Piedmont) from which 18 ideas and projects were generated that the Group has implemented in recent years; these include, by way of example, the Banco dell’energia, (Energy Bank), a campaign to raise awareness of food waste, an educational project on the themes of circular economy and sustainability and a mountain cycle-pedestrian route. The last two stages of the forumAscolto instead have foreseen a call to action, with the aim to promote entrepreneurial plans in line with the needs of the local communities.

The activity of listening and involvement through the forumAscolto continued in 2020 with a new edition of the programme that started in Brescia, with the aim define a common strategy for sustainable development of the territory of Brescia, including identifying actions and projects to be implemented through agreements or partnerships between local actors.

The organization of the forumAscolto was preceded by a listening action that involved A2A's top management, the Brescia municipal administration and numerous local stakeholders, in order to define the topics to be analyzed during the forum. As a result of the interviews, three key themes emerged, which were then broken down into specific working tables: Energy Transition (Energy efficiency and renewables; Sustainable mobility), Circular Economy (Organic chain and differentiated waste collection; Partnerships with industries), Wa-ter (Protection of water resources).

The forum was designed to be conducted in two distinct moments of discussion: